Whatever happened to the good old days when you could glance quickly through the beverage aisle and tell the diet beverages from the good beverages? We’ve had such a great system for so long: if it says “diet” or “sugar free” it’s DIET, and if it doesn’t, it has some form of super tasty sugar derivative in it, whether it be cane sugar, high-fructose corn syrup, or something else awesome.

I used to be so good at telling the two drinks apart.

Lately, however, I’ve found myself repeatedly hoodwinked by the chemically synthesized impostor known as sucralose… or “Splenda”, its Christian name. The substance is 600 times sweeter than table sugar, and although it’s not as bad as saccharin, aspartame, or any other past cancer-powder, it’s still not sugar, and it still tastes like crap.

As such, I humbly request of beverage companies that you please quit trying to be sly about these DIET drinks and label them just as previous DIET drinks were labeled: with the letters D.I.E.T.

Instead, however, these sucralose-tainted drinks often use small, subtle terms like “lower sugar”, “lower calorie”, and sometimes no marquee labeling at all. This is confusing as there are plenty of legitimate “lower sugar” drinks on the market that simply removed some of the sugar (see Paul Newman’s Lightly Sweetened Lemonade). Often times, you need to read the entire label to know the difference. And to make matters worse, a lot of these drinks contain sugar near the top of the ingredient list and sucralose near the end… so it’s not even sufficient to just “look for the sugar” anymore. 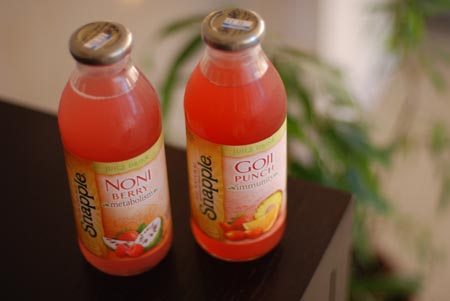 “Noni Berry” for metabolism and “Goji Punch” for immunity. Can you tell which one is the diet one?

To be clear, I have nothing against sucralose itself. It could very well be the best artificial sweetener ever invented. I just resent that marketers, by not clearly labeling it, have blurred the representation of what is and what isn’t a diet drink; and as a front-line soldier in the weekly quest to discover and sample new beverages, I’m just sick of getting hit by all this repackaged, remarketed diet shrapnel.

61 comments on “The Growing Sucralose Infestation”. Leave your own?