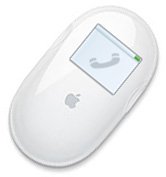 Way back on July 25th, I told you Apple was coming out with a cell phone. This was before any preliminary Motorola announcements, before any recent rumor mill gossip, and a full four months before Russell Beattie’s and Ross Mayfield’s great articles on the subject. I even told you the exact month: January of 2005.

Lo and behold, via today’s announcement in Forbes magazine (which was via this article at Engadget), Apple has confirmed that not only will they be releasing a full-fledged Apple-inspired phone with Motorola circuitry, but it will likely be shown off in January to an eagerly-awaiting public at MacWorld Expo.

While I am very excited about the official announcement, the revelation that it will be a “mid-range” device probably means that I won’t dump my Treo for it. Once you’ve tasted the sweetness that is the high-range, full-featured phone, it’s tough to imagine going back. However, we all know that Apple is not in the business of producing anything “mid-range”, so I’d bet a large sum of money that this initial iPhone release is just the tip of the iceberg. Might we see a “PowerPhone” shortly thereafter? We most certainly will. The only question is when. Want another prediction? Same time next year.

So what is the moral of today’s iPhone announcement?

Now if only Steve Jobs could get over his hatred for television, maybe we’d see a damned Media Center Mac already. I know I’d pay a healthy sum of money for one.

Note: The photo illustration above is obviously not representative of what the Apple phone will look like. It’s the product of two-minutes worth of Photoshop work.

47 comments on “iPhone Prediction Confirmed”. Leave your own?