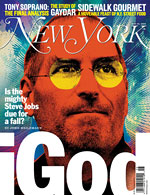 There are no reliable soothsayers in the world of Apple prognostication and anyone with any guts will get things either completely wrong or partially wrong a lot of the time, but I hold that my record is as decent as anyone’s, often times getting bold, unpopular, against-the-grain predictions mostly right but being a little early on timing. So here’s my crop for this year:

I’m not sure about the name here, but it would work given that the Nano is Apple’s best selling model of iPod and the company might want to test that branding out on another machine. The MacBook Nano is not a tablet, as many have been reporting, but merely the thinnest, sleekest subnotebook ever produced. Think the thickness of your MacBook’s folding screen times two… or about 30% thinner than current MacBooks. The machine will have a full keyboard and no removable drive, as is custom for subnotebooks, and will definitely not be a pure “tablet” in form factor. That said, it wouldn’t surprise me if the hinge on the screen allowed it to flip 180 degrees to create tablet-like mode, if you ever wanted it. This could be potentially quite functional if it used multi-touch but might also be useful while watching a movie or giving a presentation.

There have been whispers that this machine will tap Flash memory for some nice tricks like faster bootup times. If this is the case, I expect all other Apple notebooks to receive the same treatment in fairly short order (though maybe not at the Expo). One thing I’d also like to see on this machine is a Flash memory slot so that users can plus their SD cards directly into the device and transfer media. Given that 1 GB SD cards are down below ten dollars now, that could lessen the blow of not having an optical drive.

This machine will unfortunately cause me to put my barely two month old MacBook on eBay as it is the machine I’ve wanted ever since Apple stopped making their last subnotebook, the Duo Dock.

I thought the release of the iPhone and Leopard would coincide with a massive revamp of Apple’s .Mac service, but it never did. I was three years early in calling the iPhone, but I don’t think I’m that early on this one. Come January, .Mac will become the missing link that let’s you sync your entire life, over-the-air. If you’re shocked that the iPhone can’t do something as simple sync with your iCal/Contacts/.Mac over-the-air right now but can do so in just a few seconds using a standard USB cable, you’re not alone. If you think Steve Jobs hates having his phone out of sync when he’s on the road, you’re also not alone. These features are coming, and while you can argue they should have been there from the start, you can also argue that they belong as part of a subscription package like .Mac. In order for Apple to increase their .Mac subscriptions 5-10x, they need to be part of a well orchestrated “Life Sync” campaign, and sold separately from the iPhone itself.

I believe Apple’s plan involves two concurrent strategies for getting into the life-syncing bloodstream: a) play nice with Exchange (current support via IMAP barely qualifies), and b) play nice with open technologies like IMAP and iCalendar/WebCal (already in-progress). Most big companies these days run their corporate mail on Exchange. Know what Apple runs internally, at least as of very recently? Netscape’s old mail server. I’m serious. Running that mail server for so long taught them how inferior it is to Exchange, but also taught them that by using the right combination of open technologies like IMAP, iCalendar, and WebDAV and then creating the right glue to tie it all together for the end user, they could produce an enterprise-quality experience rivaling Exchange and even beating it in many areas. Via this new and revamped .Mac service, you’ll be able to play nicely with most of the major platforms out there: Exchange, IMAP (and by extension Gmail and Yahoo Mail), WebCal, POP, and who knows what else. In 2008, .Mac will finally become the big revenue driver Apple expected it to be years ago.

One really nice side effect of the iPhone on the rest of Apple’s business is that it has shown them, in no uncertain terms, how important it is to play nice with Exchange. In order to play nice with Exchange, the integration must run deeper than phone-level; penetrating Apple Mail, iCal, and syncing services. I can’t say how yet, but I am currently running my life in an Exchange/Apple Mail/iCal/.Mac synced fashion. The way I’m doing it is really hacky and doesn’t involve any new software from Apple or anything, but it’s shown me that it’s already possible.

I predicted last January that Apple TV would be released but that its killer feature would be download-to-rent movies. The box launched, but with no such killer feature, and has thus far tanked. Download-to-own movies have always been a dumb proposition to me and it’s hard to see how Apple can’t feel the same way. Having worked at Disney, however, I fully appreciate how the business side of movie distribution can get in the way of the product innovation side, so it’s entirely possible that the only reason Apple TV didn’t launch with a bevy of download-to-rent releases was that business terms couldn’t be finalized in time. A year later, however, my suspicion is that a lot of those issues have been worked out. Come January, expect any Apple TV box or iTunes equipped device to be able to download-to-rent a selection of movies rivaling what Netflix and Blockbuster offer.

Download-to-rent is why I haven’t paid more than 60 seconds of attention to the entire BluRay vs. HD-DVD slugfest for the past four years. In the end, I don’t want a disc. I just want the bits. And I only want them until I’m done watching the movie.

I don’t think we’ll be seeing any major hardware changes to the iPhone at MacWorld. Maybe some more memory and some price adjustments, but the bulk of the time spent talking about the iPhone will be related to the aforementioned syncing capabilities, a new iPhone SDK, and probably a new iPhone OS update as well. Jobs will have plenty of sample apps to show off and will detail a certification program whereby developers can submit their apps in order to get into an Apple-hosted directory. If Apple’s smart, they will set up some sort of revenue sharing program for app developers, although I’m not exactly sure how this would work. Apple could do all of the billing themselves but this strikes me as a big undertaking. Conversely, they could charge developers a one-time or recurring fee to be listed in the directory, but this strikes me as not very lucrative since they’d make the same amount on an app downloaded one time as an app downloaded one million times. Perhaps the solution is to offer developers a choice: a) do everything on your own, including billing and hosting, and we won’t touch your app or take a cut, or b) use our system, pick your price, give us your tax information, and we’ll take a small cut, but we’ll also bless and promote your app, thus increasing your sales.

Who knows. Maybe the best solution would be to stay completely out of the revenue stream and just concentrate on profiting from the hardware. We’ll see.

We also will most certainly not hear anything about a 3G-based iPhone. There is no way Apple will peep a word about such a device unless it is produced and ready to ship. iPhone sales expectations are already very high and to risk creating a dead spot in the sales cycle just wouldn’t be smart. Instead, you’ll be hearing at MacWorld only the things that will be affecting and improving the current generation of the iPhone. In other words, things that will either a) get you to go out and finally buy one (3rd party apps, more storage, more functionality) or b) make you all the happier that you already own one.

Leopard seems to have taken longer to release than expected, and whenever that happens, you can bet that it probably shipped with a few features missing as well. One feature we know for sure is missing is wireless backup via TimeMachine. Seeing as TimeMachine is one of only a small handful of features in Leopard that materially changes my life for the better, I’m super anxious to be able to use it wirelessly. Hauling my portable hard drive out of a cabinet, plugging it into the wall, and then connecting it to my laptop via Firewire while sitting on my couch just isn’t something I’m going to do every day. I’ll be lucky if I remember to do it every month… which completely kills the purpose of TimeMachine. My portable hard drive should be tucked away and connected to my wireless network (either wirelessly or by ethernet) and whenever my laptop joins the network, TimeMachine should silently do its thing. This is no doubt the way Apple has envisioned it all along, and either in January or shortly thereafter, I expect a Leopard update to add in this functionality as well as several other things. Syncing and .Mac integration should receive an upgrade, as mentioned above, as well as a ton of fixes to all of the little weird things about Leopard that don’t seem quite right yet.

This is really going out on a limb, but I also think Apple will purchase a stake in SWSoft, the makers of Parallels. SWSoft is currently funded partially by Intel’s venture group, which affords Apple a tiny bit of influence (being friends with Intel and all), but there is no official relationship at this point. Although Boot Camp is a nice thing to have in Apple’s back pocket, my belief is that solid software-based virtualization of Windows is of great strategic value to Apple. Microsoft apparently thought the same thing when they purchased Connectix, the makers of the previous leader in Windows Virtualization, Virtual PC.

SWSoft’s first and only institutional round came in mid 2005 in the form of $12.4 million. If there is another round between now and an IPO, I would think Apple would love to be in on it — a lot of it. After all, with $15 billion in the bank, one can argue that it’s the company’s responsibility to start making a few more investments. Anyway, like I said, this is major limb walking, but no guts no glory!

All in all, expect another solid MacWorld Expo here with a) the world’s sexiest subnotebook, b) major iPhone advances on the software functionality side, c) a bonafide Netflix killer, and d) major syncing and .Mac improvements. It may be a decade before another Expo tops 2007’s, but game-changers like the iPhone just don’t come around very often.

As far as products you won’t see, I put a pure tablet at the top of this list. I’ve seen reports that a tablet release is “imminent” at the Expo, but I just don’t see the market for it. Perhaps the only semi-useful application I see for it would be as an eBook reader. Like a better looking Kindle maybe. Still, not worth Apple’s time in my opinion. Not gonna happen.