If You Love Something Give It Away 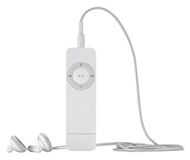 I want to give away some iPod Shuffles. I’d like to give away at least one a month and possibly one every two weeks for the rest of 2005 if that’s okay with everybody. This isn’t some freeipods.com network marketing dealio… I just really want to give some Shuffles away.

The only problem is, I can’t think of a really inventive way to give them away right now. Earlier this year, I gave Isaac Lin and Jay Robinson an Apple Bluetooth Keyboard and a Wireless Mouse in a haiku contest that turned out great, so I may go that route again, but I’m thinking there might be a better way.

In light of my lack of creativity at the moment, I’ve decided that the very first iPod Shuffle will go to the person who comes up with the best way for me to give the rest of them away. Here are some considerations to keep in mind when coming up with your pitch:

425 comments on “If You Love Something Give It Away”. Leave your own?