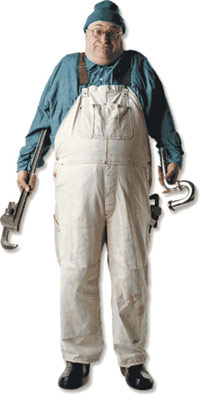 The Bloglines Plumber. Poor guy. He was recently even replaced with balloons.

I wished this day would never come but have suspected for the last couple of years that it probably would. This weekend, I officially said goodbye to the website that changed the way I consume information more than any other site I’ve ever used: Bloglines.

I started using Bloglines in 2003 when it was the only viable web-based RSS Reader and before most people even knew what RSS was. It instantly changed my information consumption routine from pull to push. The thoughtfully designed interface and reliable uptime allowed me, and thousands of others, to quickly and efficiently sift through a lot of information in a short amount of time.

When Ask.com purchased the company from Mark Fletcher in 2005, I applauded the acquisition and just hoped the new company would more or less leave things they way they were. Unfortunately, over the last few years, uptime has gotten progressively worse and there haven’t really been any great features launched to offset the decline in reliability. Sure there’s a Bloglines Beta that’s been out for over a year now, but I don’t even like it as much as Bloglines Classic.

I don’t even mind the planned and unplanned downtime Bloglines occasionally sees. That’s fine. What I mind is that Bloglines has seemingly entered the late stages of Alzheimer’s over the last few months. Often I will read an item only to be reminded once, twice, or ten times in the future that that item is still “unread”. Or, all of the unread counts will rocket up to 200 and then back down a few minutes later.

When software starts to increasingly work against you, it’s time to change software, and so finally, I made the switch to Google Reader this weekend. I applaud Ben Lowery, Eric Engleman, and the Bloglines Team for all of the hard work they’ve put it over the last few years and I realize they are probably swimming against violent tides, but it’s just time to move on.

So far, I’ve found Google Reader to be much more reliable — which is no shock — but I’ve also found some niceties in the interface that I wasn’t expecting. One of the reasons I didn’t switch earlier was that I like Bloglines’ style of marking everything as read as soon as I click a feed and then allowing me to mark all as unread easily if I need to. I also like how Bloglines’ allows you to permanently save items on a feed-by-feed basis and separate them from the actual new items (Google makes you just “Star” them and they go into the big pile of Starred items).

I have to admit, I was extremely skeptical of Google Reader’s option of marking items as read as they pass through the browser’s viewport, but if you confine yourself to scrolling with the space bar, it actually works beautifully. In fact, I would go so far as to say the spacebar is Google Reader’s “killer key”. It just makes everything work better.

Another nice feature is the ability to view all items in a feed you’ve maybe just subscribed to and then quickly spacebar through everything. Google Reader only loads a few of the items and then as you get further down the list, it automatically loads more. Seamless. Great for feeds like Momoy which are image-heavy and text-light.

Finally, Google Reader’s mobile interface is spectacular on the iPhone. It’s really a joy to use.

39 comments on “Goodbye Bloglines…”. Leave your own?