Jason Kottke: Master of the Set Up 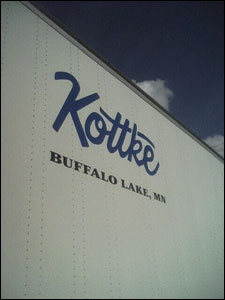 I’ve only met Jason Kottke once. A few years ago at SXSW, I said hi, we chatted for a few seconds, and that was that. Although I’m occasionally in his sidebar and he links to Mike Industries every so often, I can’t say I’m a “friend”. In fact, while I’m on the subject, am I the only one who hates when people on the web say “our friends at ____” or “my good friend ____” when they’ve never even spoken to the person(s)?

Jason Kottke is known as one of the most interesting bloggers around and a particularly good “linkblogger”. But what does it mean to be a good linkblogger? For your standard “prolific linkblogger”, it’s simply about unearthing interesting new links on the web. Simple enough, right? Just follow other linkbloggers and regurgitate the good stuff.

What separates good linkbloggers from great linkbloggers is a little more subtle though: it’s all about the setup. And this is where Kottke excels. Take for example this entry from yesterday:

This timelapse video of man trapped in an elevator for 41 hours is difficult to watch. The video accompanies an article in the New Yorker about elevators.

White has the security-camera videotape of his time in the McGraw-Hill elevator. He has watched it twice-it was recorded at forty times regular speed, which makes him look like a bug in a box. The most striking thing to him about the tape is that it includes split-screen footage from three other elevators, on which you can see men intermittently performing maintenance work. Apparently, they never wondered about the one he was in. (Eight McGraw-Hill security guards came and went while he was stranded there; nobody seems to have noticed him on the monitor.)

The end of White’s story is heartbreaking. On the plus side, the article also discusses a favorite social phenomenon of mine, how strangers space themselves in elevators.

If you draw a tight oval around this figure, with a little bit of slack to account for body sway, clothing, and squeamishness, you get an area of 2.3 square feet, the body space that was used to determine the capacity of New York City subway cars and U.S. Army vehicles. Fruin defines an area of three square feet or less as the “touch zone”; seven square feet as the “no-touch zone”; and ten square feet as the “personal-comfort zone.” Edward Hall, who pioneered the study of proxemics, called the smallest range — less than eighteen inches between people — “intimate distance,” the point at which you can sense another person’s odor and temperature. As Fruin wrote, “Involuntary confrontation and contact at this distance is psychologically disturbing for many persons.”

Let’s look at what makes this a great item:

1. Read the first sentence. This is the first hook. Timelapse videos are generally entertaining, and the “difficult to watch” part is a cue that, yes, you should probably at least try to watch it because it’s dramatic.

2. The setup also mentions the full article in the New Yorker, which is very important, since it provides a lot more information than the video. A straight link to the video is not nearly as interesting as video plus full background story.

3. The first quote from the article is well-selected. It only serves to increase the reader’s curiosity about the incident.

4. “The end of White’s story is heartbreaking.”. This is probably the most genius part of the link. It makes watching the video alone almost pointless. It *requires* the reader to click over to the New Yorker article to find out what actually happened. And this bit of motivation turns out to be quite important because the New Yorker article is written in a very strange style whereby White’s story is sprinkled into the overall piece a few paragraphs at a time. It’s quite a bizarre format, but since Kottke has given me motivation to find out what happened to White, I end up reading a lot more of the New Yorker article than I normally would have.

5. Kottke also parenthetically mentions how the article talks about the social phenomenon of “elevator spacing”, an extra added bonus for those of us who have always had an unnatural interest in such things.

6. And finally, Kottke credits Andy Baio for exposing him to the link… and upon visiting Waxy, Andy in turn credits Nelson Minar… and upon visiting Nelson’s delicious page, Nelson credits Metafilter. The “via chain”. So nice. Yet so often neglected by people (self included).

So in the end, we have a a story/video that most people probably would have either skimmed or missed entirely, but because of the thoughtful setup, both were consumed in their entirety with nervous anticipation. In fact, two other people sent me links over IM to the elevator video this morning and when I asked each if they had read the accompanying New Yorker article, they both answered “Nope… too long”.

Linkbloggers remember: The setup is everything.

23 comments on “Jason Kottke: Master of the Set Up”. Leave your own?