I just got back from the Economics of Social Media conference put on by Rafat Ali, Staci Kramer, and the rest of the PaidContent crew and it was really an excellent event. One-day conferences are great because there’s no filler. There’s no scrambling to populate 50 panels with people who may or may not be the best choices to speak. There’s also no deciding which of 6 rooms you want to be in every hour.

One track. One room. All superstars. (Needless to say, I wasn’t a speaker.)

For Rafat’s first conference, they really knocked it out of the park. Not every panel was an A+ but there were no duds and they clearly had the right people on stage in most cases.

The only awful thing about EconSM though — as is the case with most conferences — was the design of the conference badges. While talking to Andy Sternberg of LAist, at one point I interrupted him and said:

“You know what super-complicated innovation would double the amount of socializing going on in this lobby? Double the size of the badges. I can’t see anyone’s name!”

… which got me thinking about something Kottke has penned about several times in the past: what should a badge really look like?

As an attempt to answer this question, I present the EconSM badge as reference and my newly proposed S.O.B. or “Socially Optimized Badge” as a proposal. An Illustrator file of the S.O.B. template is provided free of charge at the end for any conference organizers who want to use it.

The EconSM Badge (Typical of 99% of badges in the world) 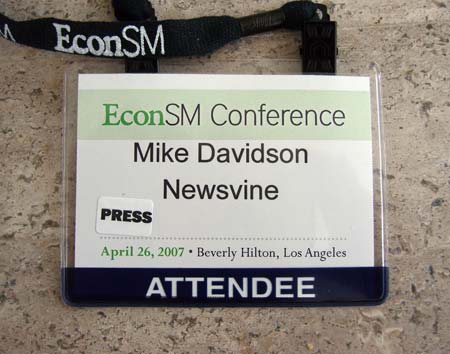 The S.O.B. or “Socially Optimized Badge”

The S.O.B. treats the conference badge like a highway sign, complete with a typeface modeled from U.S. highway signs: Interstate.

Highway signs are designed to be read from as far away as possible and always present the most important information biggest and boldest. The S.O.B. allows you not only to minimize the awkward glances down while you’re talking to someone whose name you don’t remember, but also makes spotting people across the room a lot easier. The typical conference badge loses its readability at about 10 feet but from my own crack-testing, the S.O.B. appears readable from up to 30 feet away. Go ahead and try stepping away from your computer screen as far as possible and you’ll see the difference:

As promised, here is the sample Illustrator file for the S.O.B. Use it with the knowledge that you are doing your part to bring people closer together at your conference. It really does make a difference. I’ve included the longest name I could think of (actually, Niall thought of it) so you shouldn’t have to reduce the font sizes at all as you print your own badges.

56 comments on “Building a Better Conference Badge”. Leave your own?