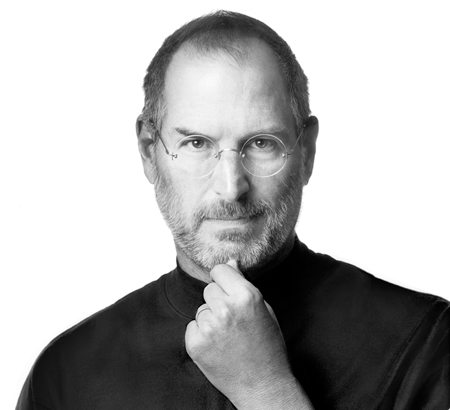 When someone dies, the phrase “there will never be another” gets used quite frequently. It’s one of those phrases that is both always true and yet almost always not true. It’s true that, yes, no other person will ever be exactly like any other person, but it’s usually false in the compliment it’s actually trying to pay.

In almost every case, when a public figure dies, there are plenty of his or her contemporaries ready to fill the void. A great guitarist died? Well we at least have hundreds of other world class guitarists to listen to. A basketball star died? Luckily we have plenty of those too.

The truth of the matter is that even best of the best in most fields, at any given time, is only a little better than the rest.

Counterexamples to this seem to happen only a handful of times per century. The number of times we lose someone whose impact was so dramatic and whose substitute seems so unfathomable is vanishingly small.

We lost that person yesterday in Steve Jobs, and we are only beginning to feel the impact of his absence.

What gets lost in all of these Steve Jobs tributes you read online is just how dark things were for personal technology only ten years ago. People forget that until the iPhone came out, “The Apple Way” was still largely on the sidelines. Windows PCs were unavoidable. Cell phones were unapproachable. There were even a few years around the turn of the century when many websites didn’t even work on Macs because developers only coded to PC Internet Explorer “standards” (airiest of air quotes there, of course).

It was just dark as hell out there; especially for those of us who wanted so badly for the story to end differently. The lesson that idealism and attention to detail could lose out to “good enough and a little cheaper” was not something we wanted to learn.

The long, but impeccably planned, turnaround that Steve Jobs has led over the last 14 years is impressive for thousands of reasons. None is more astounding to me than this one though: he was quite literally the one person on the face of the earth capable of pulling it off.

He wasn’t just the best choice. He was the only choice. And that’s why we’ll miss him so much.

When people die after suffering from prolonged illness or pain, my thoughts are almost always positive. Death is not something I fear, and when it’s ultimately the relief method for someone’s pain and suffering, I feel happy for their newfound peace. I felt this way when Kurt Cobain died, for instance.

With Steve Jobs, however, I don’t get the feeling death was any sort of relief at all. Yes he was obviously at peace with the concept, as he expressed beautifully in his Stanford commencement speech, but SJ put the pedal to the metal until his final breath.

What would you do if you knew you had a short time to live? Most of us would quit our jobs. Many of us would travel. Some of us would relax and keep our stress levels down. What did Steve do? He hit the gas. He released the iPhone, unveiled the iPad, and led Apple to its current and still unfathomable status as the most valuable company in the world.

Just as incredibly, he was able to lift his body out of Apple without also removing his soul; on a day when many once feared AAPL stock would dive precipitously, it’s comfortably unchanged from the day before.

He had his flaws and he may not be the greatest person to ever live, but no one has ever left this world more on top than Steve Jobs has just left it.

14 comments on “Never Be Another”. Leave your own?