Help Virb Win the Fight For Tastefulness on the Web 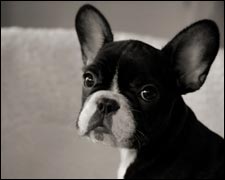 Butters the puppy says:
“I’m not even crate-trained yet and I am on Virb.”

So this is it. Pretty vs. ugly. Clean vs. cluttered. Class vs. schlock.

I’m talking about Virb. And specifically, its newly initiated battle for the hearts and minds of would-be MySpacers.

Those of us in the web industry have had to put up with a peculiar theory since the meteoric rise of MySpace: that encouraging people make absolute pig sties out of their home pages is the leading factor in the success of MySpace and MySpace-like sites. The theory goes even deeper in saying that MySpace itself succeeds because of its own awful design.

Those of us who refuse to believe such claims have our own claims. Specifically that MySpace instead is succeeding despite its woefully gaudy design esthetic. We hold that it was the only social network around a few years ago that did enough important things right in order to build up a huge lead, and since it’s built up that lead, it’s essentially stood still on a foundation that grows shakier by the day.

It was with great anticipation then that I began beta-testing a new site called Virb several months ago. Virb is the brainchild of a company called PureVolume and it’s absolutely everything a social network should be. It matches MySpace feature-for-feature and then some, but the great part about it is the thoughtfulness and style with which everything is presented. Under the keen eye of founder Brett Woitunski and the masterful design acumen of Ryan Sims, every single pixel of the site impresses. From the typography to the interactivity to the copywriting, it’s a jawdropping piece of work. It’s a place you’re proud to have a personal page on.

So what’s missing from Virb? Well, it just launched a couple of weeks ago, so really only one thing: your friends. And that is why — in my opinion — nobody’s been able to unseat MySpace yet. It’s extremely difficult to move entire social circles of people, no matter how great your offering is.

I could write a long review of Virb here but Brian Ford at Newsvine and many others have already done so, so instead I’ll close this entry with a plea:

Check the site out for yourself, and if you like it, be an ambassador in the name of good taste on the web. Invite your friends and let’s see if we can prove the antithesis of the schlock design theory: that better craftsmanship, better taste, and better effort will always win out in the end.

Here’s my page in case you want to kickstart your friends list with /mikeindustries.

59 comments on “Help Virb Win the Fight For Tastefulness on the Web”. Leave your own?