Camino: Supermodel of a Browser? 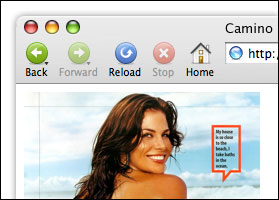 Being a Mac user, I’ve always had a problem with Firefox. I’ve thought long and hard about tasteful analogies for my relationship with it, but I keep coming back to a somewhat shallow one: Firefox is like the girl in school who you knew you should probably date because she’s intelligent, multilingual, and funny, but she just wasn’t very attractive to you.

Safari, on the other hand, has been the opposite: Hot as hell and lives right down the street, but offers little more than instant gratification of primal needs.

I, on the other hand, have never liked using multiple apps for any chore, whether it be browsing, e-mail, design, code, or whatever else. I want a single point of entry into whatever I’m doing.

Camino is like Firefox with a beautiful makeover. I’m not talking about Lee Press-On Nails and an Ogilvie Home Perm… I’m talking an X-Code workout regimen, a healthy diet of Cocoa, and a Quartz mineral bath. Think of Firefox as Paris Hilton — gets all the press, will compile for anybody, and is a bit strange looking. Think of Camino as younger sister Nicky — much cuter, a bit more refined, and up until now in the shadow of her sister.

Anyway, with today’s announcement of the official 1.0 version, Camino has finally emerged from the shadow of its older sister to become a true contender in the Mac browser space. It looks better than Safari and it feeler faster than Firefox… that’s a great start. Here are some more things I am loving about Camino:

What don’t I like about Camino? Well, really only three things:

So with that, I will now be trying out Camino as my primary browser for the next month or so. If you’re lookin’ for a change, I recommend you do the same.

Note: Observant readers may notice that I first compare Firefox to a smart woman and then to Paris Hilton. Two separate analogies. Try not to confuse them.

66 comments on “Camino: Supermodel of a Browser?”. Leave your own?